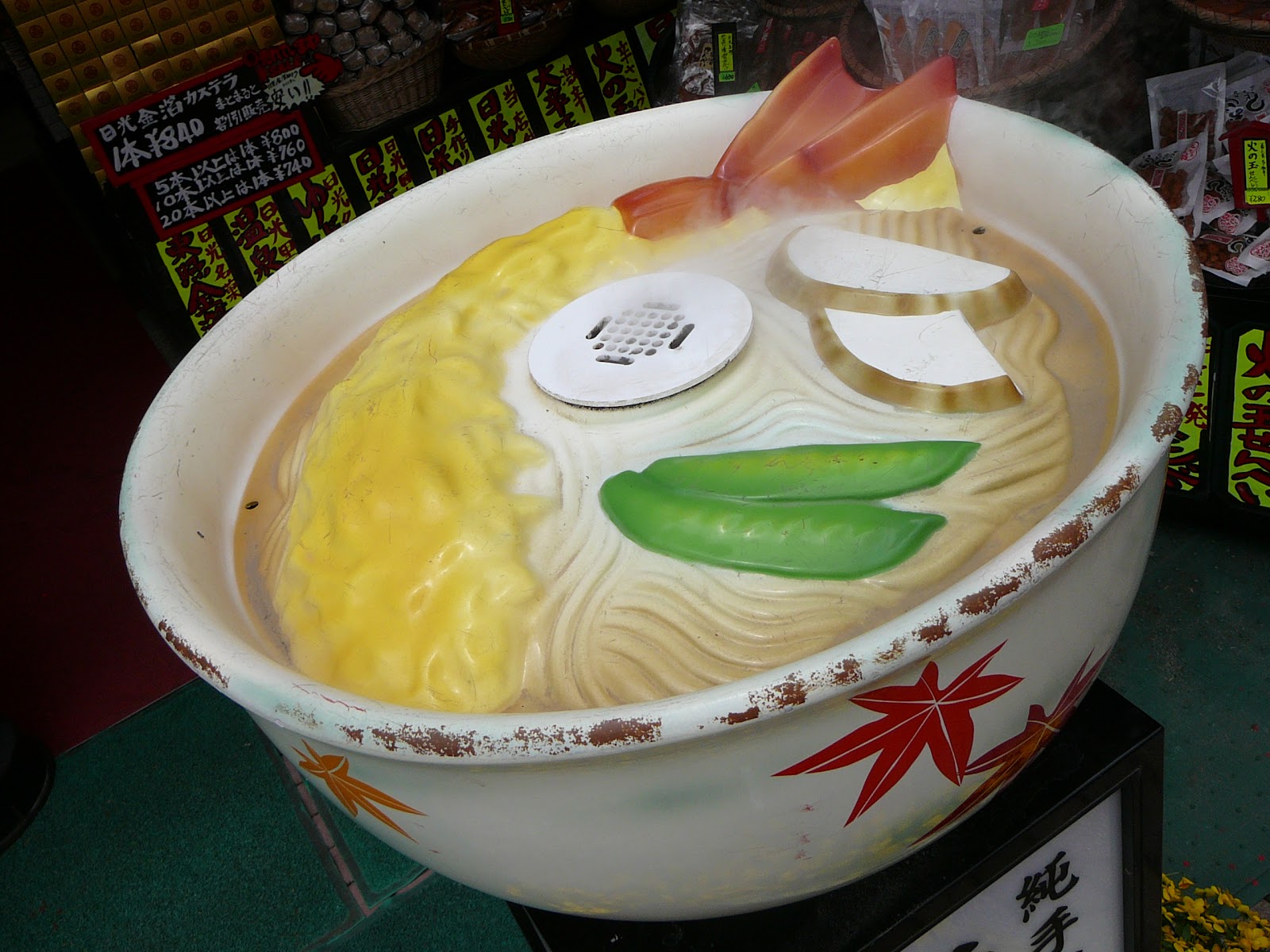 Toronto is in the middle of a sudden surge of ramen restaurant openings so I figured I'd write a bit about one of my favourite things. Let's start at the beginning - ramen in Japan.

In Japan, ramen is fast food. You're not going to a ramen-ya with five friends and catching up over three lingering hours of slow slurping. Every place I had ramen in Japan was, at best, a couple of communal tables; usually I'd just be sitting at a counter in front of the kitchen. There are also NUMEROUS styles of ramen (google is your friend here, or if you want a dose of awesome, hunt down a copy of Lucky Peach vol 1 which will give you an overview not just of ramen, but also has a section on eggs [these are probably my two main food obsessions]). However, one commonality I noticed in the various ramen-ya I visited was that there were always condiments on the table for you to tweak your ramen with - minced/crushed garlic, slivers of pickled ginger, and pepper flakes seemed to be the three basic add-ons. Bowls maybe averaged around $10 (Y1000) and were ginormous. And the flavour...eating ramen in Japan was like a punch to the face. The levels of fat you're dealing with can get pretty intense. But the number of flavours in a single bowl...the complexity you can find in just the broth...sure, you're taking a couple years off your life but it's worth it.

My favourite ramen in Japan was at Jangara ramen in Tokyo. I think I wound up here because it was in the guidebook and easy to find (I'm kanji-illiterate so it was reassuring to have a guaranteed, easy to find, goal). I think that Jangara may just be "ok" or "decent" in the Japanese pantheon but I would go to great lengths to get another bowl of this. The key was that I liked all the regular stuff in the bowl (pork, menma [fermented bamboo shoots], egg) but they also added a dollop of something I'd never encountered before - mentaiko. Mentaiko is marinated pollock roe and IT IS DELICIOUS. Actually the first Jangara bowl I had was too intensely porky for me (the bowl I ordered had two types of pork - charsiu and fatty), the second time I went I only got one pork. Japan was great though, because even though I'm illiterate, I just popped over to the Ramen Museum in Yokohama and stuffed myself some more. Plus I saw a line of people once while wandering the streets of Tokyo and hopped in line after realizing they were lined up at a ramen-ya. Basically, ramen in Japan is SUPER AWESOME.

Ramen in Toronto...not so much. Actually, ramen outside of Japan seems to be unable to reach the heights of ramen in Japan, which is not surprising when you consider the obsessive approach to cooking in Japan, where a ramen restaurant serves only ramen, udon restaurants serve udon, etc. So let's do a quick rundown of what's wrong in general with ramen places outside of Japan.

Toppings: Quality is highly variable but in general, even if you find a place with the same quantity of toppings as what you might get in a Japanese bowl, the quality is lacking (and vice versa). My other pet peeve is the lack of menma. WHY? I can buy this in the grocery store, it's not hard to get.

Condiments: WHERE ARE THEY? Where are my extra condiments? These are necessary.

Broth: Hahahaha! This will require its own paragraph.

See above - logic suggests that part of the reason why Japanese ramen-ya can churn out such insanely good broths is because of an obessive single-mindedness and years of effort. I've never had broth outside of Japan that really struck me with a "wow" moment. And part of that reason is because of how good instant noodles are these days. What's that you say? Instant noodles suck? Not anymore - in the past few years there's been a number of manufacturers cranking out surprisingly good frozen noodles complete with broth. My ramen preference seems to be Hakata-style, and if you pick up a tonkotsu frozen ramen and add few of your own choice ingredients, you're basically playing in the same space as the majority of ramen places I've tried outside of Japan. I will now proceed to judge the various ramen places I've been to outside of Japan, because I like to think about ramen for as much of the day as possible. Unless otherwise noted, these are all in Toronto.

Momofuku Noodle Bar (Toronto and NYC): Ok, let's get this out of the way - this is not real ramen. I'm not saying it's bad, but IT IS NOT REAL RAMEN. Which is okay, because I don't think they've ever claimed it's authentic. Like everything else at Noodle Bar, they're taking a familiar Asian dish and giving it a bit of a twist. Personally I actually don't really like this because the egg bothers me, I like mine firmer and marinated.

Kenzo: Ewwww, I went to the downtown one and got their special (King of Kings?) and it was so gross I felt sad while eating ramen. Ramen shouldn't make you feel sad, it should make you feel happy. I never went back to Kenzo.

Kinton: Went once; I like the noodles but found the broth was pretty boring. I had the spicy garlic I think. Um, hi, if I'm ordering a spicy garlic soup shouldn't this blow my head off instead of me poking at my bowl in mild disinterest?

Ajisen (various - haven't been in Toronto but went in China): Don't judge! I went to Ajisen like twice when I was in China because I'm illiterate and a cartoon girl holding a bowl of noodles is very reassuring to me. Like Momofuku, this is just "noodles" not "ramen. This is like food court food.

Sansotei: Went once and had the tonkotsu. Noodles were meh, broth was ok but I'd just as soon pop open my bag of frozen tonkotsu instant noodles and eat in my pyjamas.

Guu on Bloor: It's only served as a special and they seem to rotate what kind of ramen they're serving. The bowls are smaller than they should be, but the ones I've tried have been excelle. Everything in my little bowl was solidly good. Their ramen is pleasant enough that I've been more than once and would go again to see what they're doing.

Ramen Sanshiro (NYC): It's a secret ramen-ya! The ramen was ok, it wasn't the style I like and wasn't too memorable, but it's SECRET!


Ippudo (NYC): The first time I went, I had their akamaru modern, which is I guess their best-known/special ramen? I didn't like it. But that was partly personal preference instead of the bowl itself; Ippudo is actually my preferred non-Japan ramen-ya. I think I usually get their classic bowl now. They're skimpy on the toppings and from what I remember the bowls are a bit smaller than they should be, but the flavours and noodles are decent. I'd argue that this should be the baseline for a decent bowl of ramen.

Santouka: Toronto's ramen winner! This isn't too much of a surprise; when word spread that Santouka was coming to Toronto a lot of people were waiting for it to open. Santouka, like Ippudo, is a Japanese chain and like Ippudo, their ramen actually tastes like the ones I tried in Japan. Santouka and Ippudo aren't the same styles of ramen but quality- and value-wise I think they're pretty much equivalent. There's things I do/don't like about each of them, but overall I'm happy enough with either. I'm not sure what Santouka's non-noodle offerings are like but it'll be fun eating my way through the menu.

Raijin: I didn't particularly like their toppings but it sort of seems like they've taken Kinton's noodles and placed them into Sansotei's broth - plus it's the size of a normal restaurant so shorter wait times.

Ryoji: Ok, I admit that if you give me black garlic ramen, I like you better. Ryoji gave me black garlic ramen with no waiting in line and non-cramped seating; they will now be my 2nd preferred ramen place in Toronto. Actually, I now plan to eat ramen only at Santouka or Ryoji and ignore all the other places. I liked the broth, the noodles were fine, and the toppings were decent (note: the black garlic ramen at Ryoji is so much better than the one at Raijin).

Ryus: This sort of a dark horse contenter. Ryus is the only place in Toronto which is actually setup like a proper ramen-ya. I.e., the only thing you can order is ramen and it's almost all bar seating (note: there is a tiny patio out front, which is kind of cool because then you can have patio ramen). The prices and portion sizes are reasonable, the broth wasn't bad, the noodles were pretty good, but the toppings were underwhelming (WHY IS THERE NO EGG? I CAN'T EVEN ADD AN EGG?). I'm going to try them again to see how things evolve; having gone shortly after opening, I figure there's a good chance they could continue to get better. They even have a loyalty card!

Touhenboku: Chicken stock based ramen, which is a nice change of pace. Overall, I thought this was quite good. I liked the broth; the thick noodles could stand to be firmer but they weren't bad; pork chashu was ok; they give you a half-egg in the soup. You can get chicken chashu instead of pork, so this is a good place for anyone who wants ramen but doesn't eat pork. I'm likely to make this my regular ramen spot just because it's closest to home and quality was pretty good.

Bottom line? If you're in Toronto and new to ramen, I'd start with Santouka because you might as well start with the best in town. If you've eaten your way through ramen in Japan, then I bet you've already been making your own so either stick to that or drop by Santouka (or maybe try it at Guu if you see it as a special). If you've tried and liked the non-Santouka ramen options in Toronto, I'd suggest either trying Santouka or simply buying some of the frozen premade stuff and playing with it - might save you a few bucks and you can eat in your pyjamas. And I'm pretty sure we can all agree that's a good thing :)