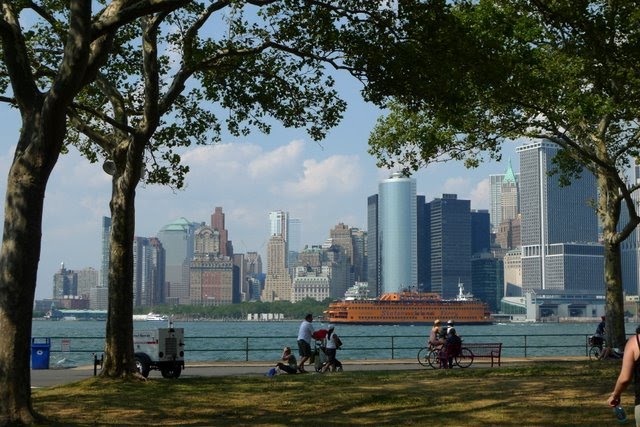 
Umm, usually I stay with friends or family.  But once I stayed at a Marriott in Brooklyn, it was right by the bridge so it's a pretty good location and cheaper than staying in Manhattan.  The cheaper B&B / hostel options all seem to be up by Harlem or Columbia University, but it's not the most convenient area so if it's your first visit, you'd probably want to be more central.  Anywhere on the south side of Central Park is basically fine for getting around to tourist places.

How to get around:

The subway is handy and gets you to most places quite well.  Just remember to check the signs to see if you're heading uptown or downtown, and also to check if you're on an express or local train.  Note also that if you overshoot your destination and want to ride back the other way on the subway, you can't do that for free at all the stations - for some of them, the entrance to the train going the opposite direction requires and extra fare.  Lots of automatic vending machines for the swipey subway cards but if you're paying with a credit card, it'll ask you for your zip code - not sure how this would work for foreign cards.  There's also a max amount of change the machines will give you, so you might need to get smaller bills.

Taxis are also pretty cheap in NYC, especially compared to Toronto.  To get from St. Marks up to Columbia is less than US$30, I think.  So if you're feeling lazy, just take a taxi.  But for getting to/from the airports, you can get to La Guardia, JFK and Newark by public transit or by airport shuttle bus - lots of info on these if you google.

I'm not going to bother listing all the tourist stuff, you should be able to figure that out yourself.  But keep an eye out for reduced or free admission (e.g., MoMA is free on Friday nights).  And keep an eye out for "suggested" admission prices (e.g., the Met admission is suggested, you can actually pay whatever you want).
The photo above was taken from Governors Island, they have miscellaneous events throughout the year and it's also just a fun place to hang out.  Free ferry leaves from the building next to the Staten Island ferry building.  The High Line can be fun too, although I got bored with it pretty quickly and wandered into Chelsea Market instead (mmm food).  Note - if you're walking across the Brooklyn Bridge, the subway entrances are actually a bit of a walk from the entrance to the bridge walkway itself.  Umm, I dunno, just wander around NYC, you'll find stuff to do.

Oh man, where to start?  Hmm let's start with high-end.  There's lots of places to choose from, but if you want a blow-out dinner and don't have a particular preference, I like Eleven Madison.  NYC also has a ridiculous number of options for high-end dining at bargain prices, especially if you're free for a weekday lunch.  If you want to test out how you feel about high-end dining, I'd pick Jean Georges for lunch.  If you know you want high-end but don't want to pay dinner prices, then I'd pick Eleven Madison for lunch.

On the lower end of things, I'm pretty obsessed with the tater tots at Crif Dogs.  My favourite is getting a deep-fried bacon-wrapped Crif Dog and pairing it with a dipping sauce from Pommes Frites down the street.  The tater tots are a large portion, so you'll probably want to share.  There's nothing particularly special about them except for the fact that they're deep fried and therefore awesome.  There's about a zillion places to eat in the city and most of them are really quite good, so just poke around and you'll find something good.

If you feel like venturing out and exploring, eat your way along the 7 train. Trust me.

Love the nightlife? Got to boogie?

Again, about a million options here.  For drinks, I spend most of my time bouncing between the faux-speakeasies because I like cocktails and the random entrances make me laugh.  They all have pretty different atmospheres, so just do a search and pick one you like.  Flatiron Lounge is by far the easiest one to find.  PDT is probably one of the harder ones to get into because of the size, but it has the most entertaining entrance.

Note that a lot of the museums have bars and parties, just dig through some NYC listings and they should pop up if there are any when you're going.  I'm pretty clueless when it comes to NYC clubs, the only one I've been to was years ago and my friend brought me there.  As usual, google is your friend.  If you're looking for something quirky though, look up Dances of Vice.
Posted by Tess at 6:25 PM