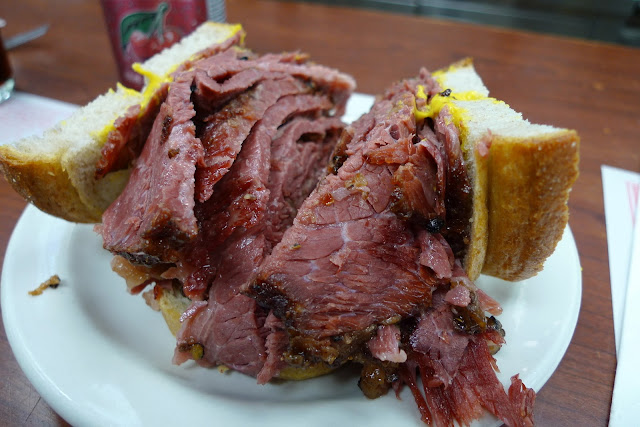 Oh Montreal, how do I love thee? Let me count the ways...

Montreal is another of my favourite cities. The food is spectacular. Even when you're not trying, the odds of eating someplace good are high. My first visit to Montreal, my friend and I tried a couple of $0.99 pizza places near our B&B and one of the had ridiculously good pizza. Food here is cheap and good.

Schwartz's - You haven't been to Montreal if you haven't had smoked meat. Everyone complains about the lines here but I think I've only waited once or twice. My favourite thing is to go at like 10am on a weekday. They're open earlier but 10am is when they start serving hot meat. I've heard that The Main, across the street, is equally good without the lineups but I've never been. And you can buy briskets to take home with you (get the unsliced briskets, the slices aren't as good). Schwartz's has two "locations" but they're actually just next door to each other - one is the original, the other is where you can buy the prepackaged briskets or order sandwiches.

Fairmount/St. Viateur - I'm solidly a fan of Fairmount instead of St. Viateur, but that's because at Fairmount you have a chance at getting a chocolate chip bagel fresh out of the oven. I'm pretty sure this is one of the things that people eat in heaven. Fairmount has more flavours than St Viateur if you go to the factories (Not sure if that's what they're called? They're further up, past Mont Royal - and both are open 24 hours). Pilgrimage is worth it - ask if you can get one of the ones coming hot off the oven MMMMMMMM. Ugh, now I really want a fresh hot bagel :( Oh, for those who aren't familiar with them, Montreal bagels are different than the ones you generally come across - they're smaller, denser and sweeter. This is also a delicious travel snack if you buy a bag for your trip home. I like to bring home the blueberry bagels from Fairmount...so good...

Au Pied de Cochon - Yet another place that requires a pilgrimage. APdC is legendary for it's Duck in a Can but FYI, keep an eye out for seafood options on their menu. I've only been once (my arteries can only handle so much) and have to say that our lobster appetizer completely destroyed the Duck in a Can. Completely. I want to go to APdC and eat more seafood even though they're known for their meatiness and foie gras-iness. And no, the lobster app isn't on the regular menu, it popped up as a special the night we went. Possibly one of the best things I've ever eaten. Don't feel that you need to finish all your food, they have take-out containers.

Juliette et Chocolate - I was actually debating whether to write to them and beg them to open up in Toronto. Preferably within a half-block of my home. I didn't expect much the first time I wandered in, maybe because I've come across very few places that have good hot chocolate, much less places that are overall good for desserts. But not only does Juliette et Chocolate meet those needs - they also have a very tasty-looking full menu! I've been meaning to go there for the actual food menu but haven't gotten around to it yet. Warning, the hot chocolate here is really rich and filling so don't drink one before dinner. Especially if APdC is dinner. They sell truffles and solid chocolates here also.

Le Santropol - This is a sandwich place. But with insanely huge sandwiches. Lots of veggie options. And if the weather is warm, they have a really awesome back patio.

Frites Alors - Come here if you want to try poutine, or even if you just want fries. The fries themselves are really good and the poutine options are interesting.

Joe Beef - I'm not sure how I feel about Joe Beef vs APdC. They're generally mentioned in the same breath and in some ways the food is similar but they're also quite different in a lot of ways. Joe Beef's claim to fame is the Foie Gras Double Down (yes, you can get this in a half-portion and no, I didn't eat one). But I had some amazing dishes when I went. Next Montreal visit would probably be back to APdC for me just because I didn't get to try as many things, but I'd be quite happy alternating between Joe Beef and APdC each trip. Warning - Joe Beef's main dishes are massive. My cousin and I ordered one to share - the main was big to start with, but it also came with two surprise side dishes. SO MUCH FOOD.

There's about ten million other ridiculously good places to eat in Montreal. I think it's actually harder to find a bad or even mediocre place than to find an excellent one.

I've now settled on "anything within a few minutes walk of Mont Royale station" as my favourite area to stay. Closer to the bagel shops and APdC - further up the hill than Schwartz's. Mostly B&Bs in the area. But Montreal is pretty small, so even if you're downtown or in Old Montreal, everything is pretty close. On my last trip, I figured out which area is the Latin Quarter and that's not a bad area, there's a Juliette et Chocolate there and easy access to the metro. The slopey area with all the bars/restaurants between Schwartz's and APdC (Mile End?) is  fun but kind of a pain for the metro. If you're downtown, by the arena, you're close to Boustan, the bigger chain shops and easy metro access. Old Montreal is atmospheric and ok for metro access.

Uh besides eat? Shopping in Montreal is pretty awesome - the big Simons department store downtown is one of my favourite places to shop, anywhere. Interesting designs, cheap prices, generally good quality. Littler boutiques run up along the slopey bit.

But really, you go to Montreal for nightlife. So good! Tons of options and every place I've wandered into has had a good crowd with music ranging from awesome to standard. I'm pretty surprised by the longevity of places too - some places have been around since the first time I went to Montreal, when I was in university.

There are also touristy things to do in Montreal, but with the exception of wandering around Old Montreal and going into the big church, I don't think I've actually visited any of them. I think my friend went to the Bio-dome and liked it. Montreal is a "wander, poke around, have fun, eat lots of food" place for me.

Metro or taxi. There are buses but I don't know where they go, so I don't think I've ever been in one. The metro is easy to use. You can also walk through the main areas, I've roamed from downtown through the slopey bit easily in a day.
Posted by Tess at 1:08 AM

thank you tess! if you think of any more restos, please lemme know. i've got a week's worth of meals to cover...