The best pork ever?

Could this be the best pork ever? 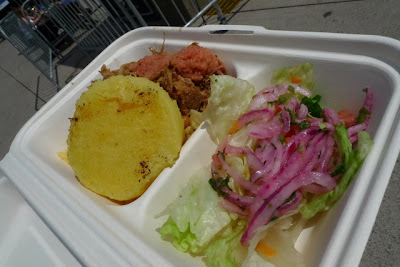 That's pretty high praise coming from me.  After all, I literally live off eating pork.  And for those of you like me, perhaps you owe it to yourself to try this delicious pork.  Many of you have tried it (some of you who have would probably agree that this is maybe the best pork ever).  Some of you may not know you've tried it but after reading this will recall a vague memory of eating some really delicious pork.
I've been hunting this pork down for years.  We've had a pretty long relationship, me and the summer pork.  It's the summer pork because that's mostly when I can find it.  It started years ago at Taste of Little Italy, where I stumbled across the delicious pork and grew into a minor obsession over the years.  I'm quite good at hunting down the summer pork now - last year I managed to eat so much that I had pretty much managed to satisfy my summer pork craving by the end of summer.
There are a few key elements to the summer pork combo you see above.  First, there is the delicious pork itself.  I think it's Ecuadorian?  I really have no idea.  You'll see it in a large cauldron, bubbling happily away in juicy delicious sauce.  The orange-y stuff on top is an oh-so-tasty salsa, I recommend putting on as much as possible.  Frankly, I'd eat it by the spoonful.  On the side is an unassuming but surprisingly pleasant salad with it's nicely marinated onions.  Hiding underneath the pork is some rice and beans.
And that big yellow circle?  THAT IS THE POTATO.  The delicious potato.  I love this potato.  Not as much as I love the summer pork, but in some ways very close.  Maybe it is the best potato ever?  It's kind of like mashed potato, which they pan fry on two sides so it's sort of both crispy and soft.
The summer pork combo can be found at summer festivals all over Toronto.  This is where I have always found the summer pork.  Prices vary at each festival, I've paid as much as $8 for the combo or as little as $5.  The $5 combo is the best because it's also the easiest to find - Nathan Phillips Square, Tasty Thursdays.  Get there before noon or you'll be waiting the better part of an hour to get some summer pork (overheard in line: "I've been waiting a year for this!" as a businessman happily orders his summer pork and his friend nods, beaming, while ordering his own summer pork).
I guess I should tell you the name of the summer pork place.  It's La Fiesta.  But that's not really necessary because once you get acquainted with the pork, you'll just know it's the right pork.  They have an actual restaurant, but it's closed right now for renovations.  I've never been there, but I asked out of curiosity.
There doesn't seem to have been much written about the summer pork.  After encountering it a few times, I finally resorted to asking about it on Chowhound after not finding info on Google, but even on Chowhound there are only a few mentions of the summer pork.  But I think lots of people know about it.  Certainly, almost every time I've found the summer pork there is a very long line for it.
What I always think is funny though, is when people order the beef or the chicken.  These are always the two other options you can get at the tent, and I'm sure that they are tasty, but OMG CAN'T YOU SEE THE PORK BUBBLING AWAY AND LOOKING DELICIOUS?  Lol, dear people who did not order the pork: I am giggling behind your back.  Overheard in line, customer talking to cashier: "Umm what should I order? What's your favourite?" / "The Pork!"
The summer pork: it will put a smile on your face :)
Posted by Tess at 12:49 AM

I think you have decided for me what I must eat for lunch on Thursday. Thank you Tess.

I ate this at Nathan Phillips Sq this past Thursday.