Let's cut right to the chase - whose smoked meat reigns supreme in Toronto?  Thanks to The Stop, we had the perfect chance to find out at the Deli Duel.
Goldin's?  The only place I'm aware of where you can order a Goldin's smoked meat sandwich is Free Times Cafe.  Otherwise, I think they mainly sell whole briskets. 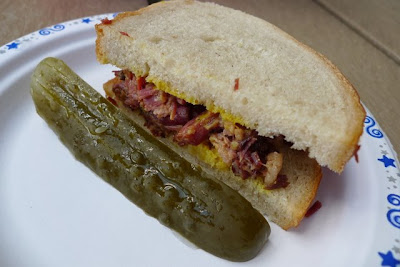 The Stockyards?  Rowena and I dropped in for brunch right before the Deli Duel but assiduously avoided ordering smoked meat.  Our assumption was that considering the restaurant's proximity to the Deli Duel venue, we'd be getting a pretty consistent product. 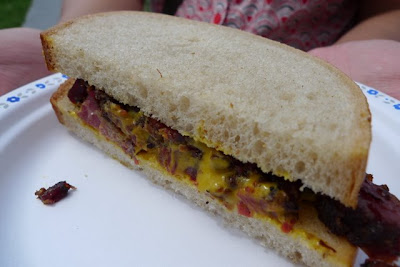 Caplansky's?  The juggernaut of the three competitors, Rowena and I had both been to Caplansky's before, but I actually hadn't had their sandwich since I was there for brunch. 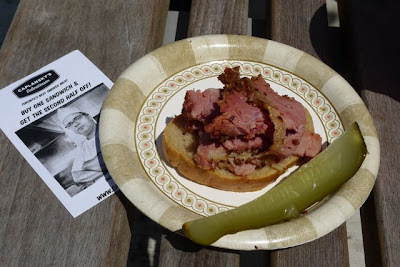 Rowena's take on our crazy brunch vs ice cream vs meat vs meat vs meat day:
The main event of the day was Deli Duel at Wychwood Barns.  I was excited as I wasn't able to eat some Schwartz's smoked meat during a recent trip to Montreal (sacrilegious to a foodie...I know!).  Tastings were $3, iced tea or lemonade $3, and beer from Steam Whistle $5. All proceeds from the event went to The Stop Community Food Centre and they were reported to have raised $10,000!
Tess and I started off with Goldin's smoked meat.  It came on rye bread, mustard, with a side of pickle.  The meat was moist, fatty and full of flavour.  It was a great way to start off the duel.  We washed the sandwich down with some refreshing lemonade.
The crowds started to pick up and we split up to stand in line at The Stockyards and Caplansky's.  The line up at The Stockyards was shorter and we actually ate it while standing in line for Caplansky's.  The Stockyards smoked meat was quite dry, and I did not enjoy the spices they used on it (and no pickle).  So far, between Stockyards and Goldin's...Goldin's, by far!
We finally got to the front of the line at Caplansky's and were given the choice between regular and spicy mustard.  Spicy (of course) and bonus pickle!  We sat down to eat Caplansky's sandwich and thought that the meat was far better than Stockyards, but ranked close to the meat we had at Goldin's.  As we were sitting, we overheard that Goldin's had run out of meat and saw that Stockyards had also run out of meat.  I later found out through Twitter that it happened at least twice during the day!
In the end, we both voted Goldin's to be the winner based on flavour, fattiness of the meat, and moisture content.  The Overall Winner of the Day turned out to be Caplansky's.
What a foodie filled Sunday with brunch, ice cream and smoked meat!  I ate so much that day, that I didn't even eat dinner!  Is this what it's like to join Tess on her foodie adventures??? If so, sign me up!
My take:
It's interesting because when I was uploading the photos to the blog, I realized that you can really see the difference in the meats.  The touch of fattiness of Goldin's vs the different texture of Caplansky's.  We were torn between these two because we agreed that Goldin's had the right texture and fattiness but was a touch salty and could have used more flavour, while Caplansky's had good flavour but was lacking the texture and fattiness.  Even though Caplansky's won, general consensus on Chowhound seems to be almost overwhemlingly in favour of Goldin's.
This was a fun day!  Luckily, Rowena and I arrived quite early to the Deli Duel because we didn't have to wait too long and were able to get our sandwiches before the first batch of meat ran out.
Lol and yes, eating a lot of delicious food is generally a cornerstone of my adventures ;)
One last look at the Deli Duel (as I drift away to check on the Schwartz's brisket I'm hiding in the freezer...you know, for emergencies...) 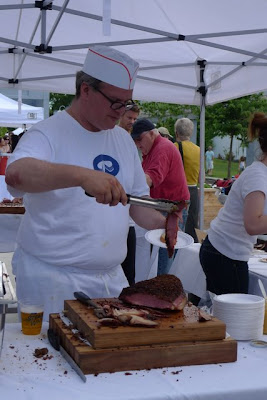